Well today I officially started learning Swift and Sprite Kit together. Keyword being “together” as I’ve been using Sprite Kit for a year now, and feel pretty darn comfortable with it.  I’ve programmed the Fantastic Worlds iOS Starter Kit, which is powerful game engine, all driven by setting simple properties and design levels in Tiled. So I’ve come a long way from where I was at this point almost exactly year ago with Sprite Kit, when I was just getting serious about learning it. Granted I had just written a book on Cocos2d (available from Focal Press and in the iBook Store), and Sprite Kit is like Cocos2d’s programming offspring, at times identical. Point is, Sprite Kit has always been a fun learning experience for me, partially because a lot of the kinks had been worked out with Cocos2d. Hopefully I can say the same about Swift in a year.

The language is, er… familiar but different. I come from an Actionscript 3 background, so at times Swift looks similar, with a lot of parenthesis instead of brackets (which I’ve grown to really love in Objective-C). And I know that programming languages are all fundamentally kind of the same, but until I get the swing of things with Swift, I also know that I’ll feel like slamming my head against the wall. When I make a mistake in Sprite Kit (with Obj-C), I usually figure out pretty quick where I messed up. My logic was wrong, or I just made a typo. Those errors still apply when learning a new language but  the most frustrating mistake is simply trying to do something that just isn’t done that way now!

And here, on Day 1 of my adventures with Swift, I’ve run into exactly that, quite a few times. I plan on documenting my day-by-day progress with some fun, free videos.  And speaking of,  here’s the first one…

And if you don’t feel like watching the video-blogged version of today’s events, here’s what it boils down to.

I started things off today by creating my own class to test with the Swift/Sprite Kit starting project. That project creates a local SKSpriteNode (a rotating spaceship) every time you tap the screen. Instead I wanted to create and declare a class I could access in any function. So let’s start by looking at the class I created.

I went to File > New > File… and picked Swift File and named it Destroyer  (so the full file name ended up being Destroyer.swift) 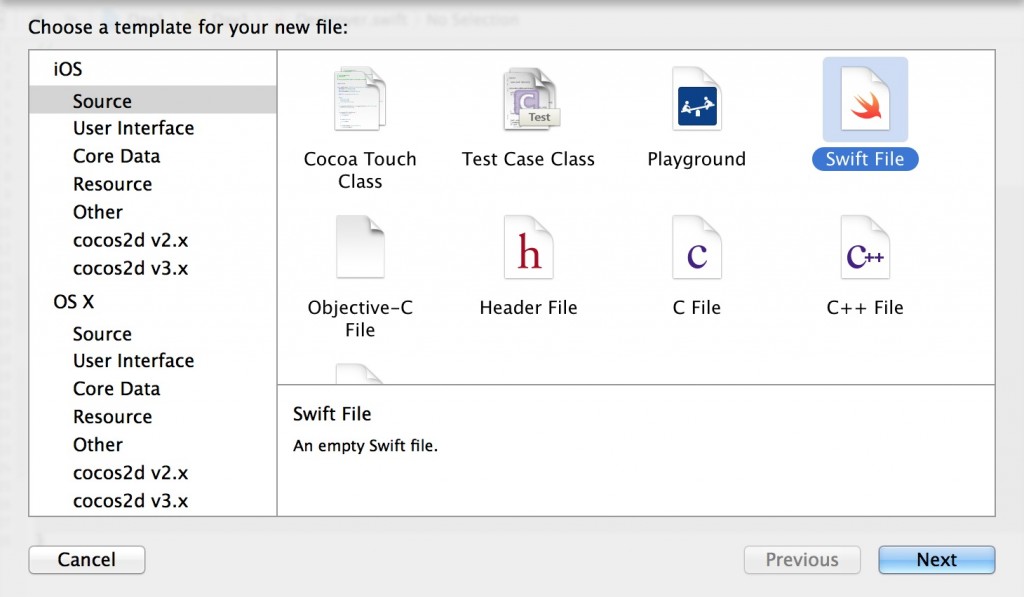 Here’s what I entered into my class…

It’s a subclass of SKSpriteNode and does about as little as possible. The highlighted lines are the important part. This will initialize the class by passing in a String value which will be used to set the texture of the sprite node (the string should match one of the asset names in the Images.xcassets catalog). Ultimately I’m just showing the image. That’s it.

Now in the GameScene.swift file, I declared an instance variable of the Destroyer class (on line 8) then cleared out what was previously in the didMoveToView function, and replaced it with what’s below…

So now destroyerNode is declared as an optional variable to use in any of the functions in the class (including the didMoveToView function). The ? after the class name means it is optional, or basically that it can be nil for now, and could be for a while. But the didMoveToView statement very quickly makes it not nil, by initializing it with the imageNamed parameter.  After that we set the position and like every good node, we add it to the scene with the addChild function (once this happens we can actually see the node when the app runs).

What’s up with the exclamation point though?  Yeah that was news to me. After I initialized destroyerNode, I had to write destroyerNode! instead. Well, this is what’s called forced unwrapping. Again, news to me. But because our destroyerNode was declared as optional, we’re essentially committing this variable to now having a value. Or else. From what I’m reading the app would crash if destroyerNode did not have a value and we attempted to unwrap a value from it. Which makes sense. What would we be adding in the addChild line if destroyerNode didn’t really exist.

And did you notice we didn’t have to import in that Destroyer class at all. Convenient right.

The video goes on about a few more things I ran into on Day 1, but I won’t make you read much more for today. Hopefully this is just enough to keep you interested for tomorrow!

Justin Dike is the owner and lead developer at CartoonSmart.com. He's taught hundreds of hours of game development video tutorials, covering everything from coding to art. These days he's working mostly on Swift and Sprite Kit tutorials, which often lead into highly polished iOS / tvOS Starter Kits, which require no programming at all, but are capable of making nearly any type game! Yeah, you read that write. You can also find Justin at the official CartoonSmart Podcast
Categories:Sprite Kit, Swift
Tags:SKSpriteNode, Sprite Kit, swift
5 Comments
3 Likes