Lets see if I can remember the steps to adding iAds to a Sprite Kit (Objective C) project. First be sure the iAds framework has been imported. 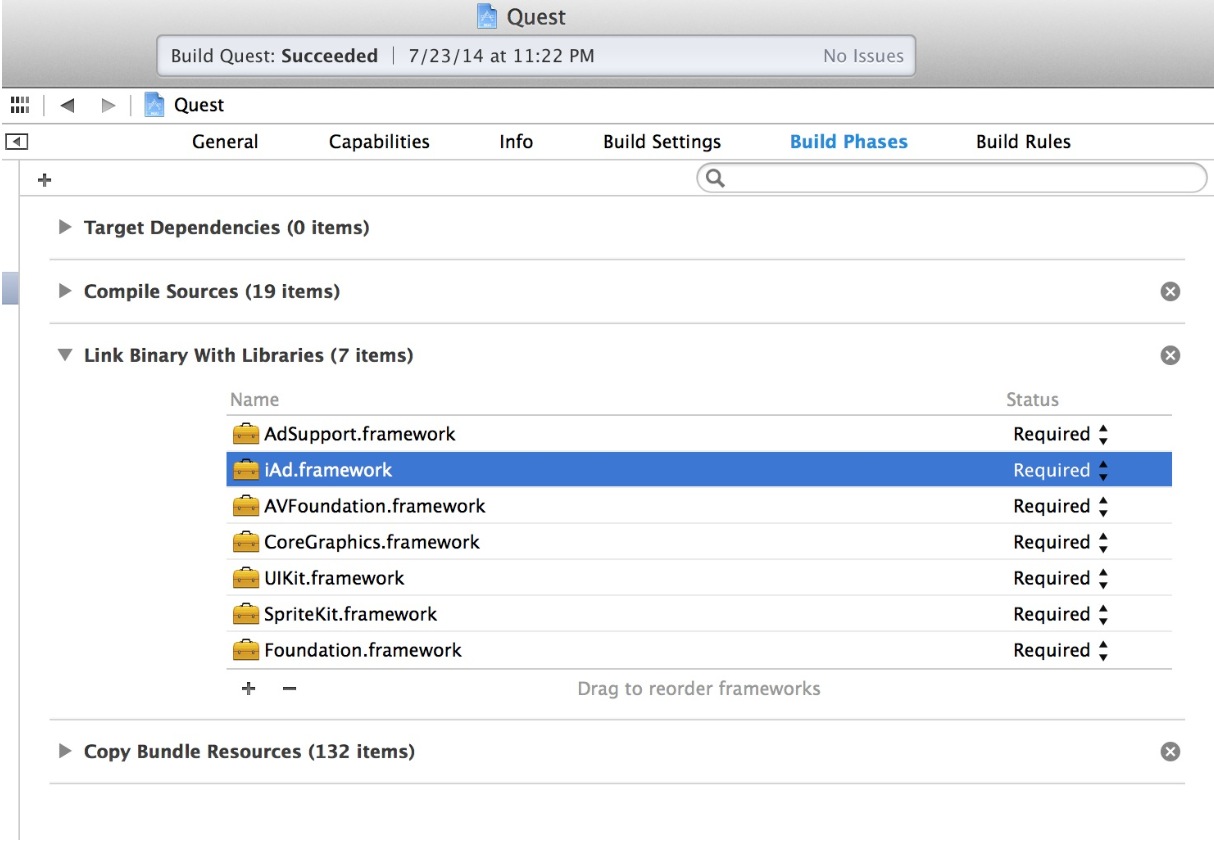 Step 2. Then head over to your ViewController.h file.

Notice we’ve added an #import statement and the <ADBannerViewDelegate>

…in the @interface portion of the ViewController.m file. You could also keep track of whether or not the ad banner is visible. Which is why in the pic below you see the iadsBannerIsVisible bool.

Step 5. Time for the meat of this. The showThinBanner method….

That code puts the theBanner at the bottom of the screen. If you want the banner at the top, just remove the line of code that sets the frame property.

Step 6: The rest of these methods run automatically without you calling them. The bannerViewDidLoadAd statement occurs when the banner loads….

The bannerViewActionShouldBegin occurs when tapping the ad and it takes over…

The bannerViewActionDidFinish runs when the banner is done being fullscreen…

The next method runs when the app failed to receive an ad. If the banner is visible (the placeholder for the ad) it animate out of the way. In this case, it moves down off-frame.

Step 7. Finally if you want remove the ads yourself, you can call this method.  Apple doesn’t recommend hiding your ads unnecessarily. Of course if someone bought an in-app purchase specifically to kill the advertising, then you’ll want to get those iAds removed as quick as possible. You’ll probably need to create an NSNotification to listen out for the purchase, then call this…

Justin Dike is the owner and lead developer at CartoonSmart.com. He's taught hundreds of hours of game development video tutorials, covering everything from coding to art. These days he's working mostly on Swift and Sprite Kit tutorials, which often lead into highly polished iOS / tvOS Starter Kits, which require no programming at all, but are capable of making nearly any type game! Yeah, you read that write. You can also find Justin at the official CartoonSmart Podcast
Categories:Objective C, Sprite Kit
Tags:iads, Objective C, Sprite Kit
1 Comment
0 Likes